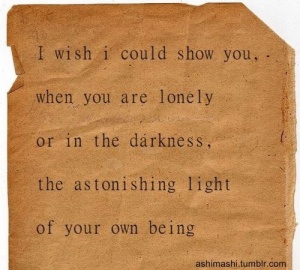 Today I returned to Roommate’s house from a stay in CollegeTown.  I went down Friday afternoon and got an allergy shot.  It was good to see Boyfriend.  We hung out with Y-Friend (Y) on Saturday and it was awesome!  She’s such a good friend!  S-Friend (S), CS-Friend (CS), and CD-Friend (CD) were dumb as usual (as usual lately anyways).  We were going to go to a part for S but Boyfriend was informed it was turned into a “boys night” which is STUPID because non of them have ever (in the two years I’ve known them) had girlfriends!  So, really they just want to exclude me, which really hurts, despite my trying not to care.  I’m glad I have Boyfriend because I feel quite lonely at this junction in my life.

I am unsettled…. I have a HomeTown phone number, an address is CollegeTown, and a job in BigCity.  When someone asks where I’m from, I can just reply: “State” because I’m so spread out that it’s true!  I finished a book today and am reminded of my blog… three entries in and I moved and stopped writing.

(Author’s note:  This was a previous attempt at blogging which never made more then those three initial entries.  This blog is a data entered journal that has been edited to remove incriminating Proper Names and Places and is being written in 2013.)

It’s late (almost midnight) and I should be asleep, having gone to bed hours ago.  Instead, I’ve been tiredly wandering around my bookshelf and aimlessly watching T.V.  Today I bought some shoe inserts.  I hope they help my poor feet!  Despite my faerie fans this big “empty” house is freaking me out.  I keep hearing strange noises.  Blah. Roommate offered her bed and I can’t help but wonder if it’d be an improvement to this damn futon with its stupid extender nonsense that makes me sleep in a tiny tiny curled ball.  I won’t sleep there even if it is better because that’s just strange.

I wish Boyfriend was here!  I found a chain of the company he works at right on my way to work!  I hope he can be promoted and transferred somewhere near my job.  I love him SO much!  Someday we’ll get married.  It makes my heart sing to think about!

(Author’s Note: Turns out, I was right!  We DID get married!  We got married on our 6 year anniversary! And Boyfriend (Now Husband) DID get promoted and transferred, even if it did take him 9 months!)

On sweet love-filled thoughts of the future, I will now try to sleep.

I found out it was my Friday (since I worked Monday).  I felt/had-the-most-absurd-urge-to like doing a cartwheel today at work.  I didn’t because I’m pretty sure it’s not within the safety guidelines…

I ran around like a madwoman until lunch.  I missed the caterers again but I had Mountain Dew!  After lunch I was saved from running by doing MORE paperwork (training videos).  I stayed an extra half hour to finish them all.  I worked 38 1/2 hours this week- yay!  When turning in my time sheet I brought my backpack into the warehouse to the time puncher thing.  Apparently this was VERY BAD of me.  On my way out the door I had to take everything out of my backpack at the security desk so security could see I wasn’t stealing.  Blah!  I was really worried because I have my inhaler, but not the box for it with the prescription information saying its mine in there.  Everything was fine and the guard acted like it was no bid deal.  It was annoying and scared me though because I haven’t had to deal with those sorts of security restrictions before!

My supervisor showed me advanced computer programs and gave me a quick run through of them today.  Then she got me security clearance to use them!  NICE! Also, FINALLY!  This morning I decided the Flags will be my nemesis!  They are used in problem areas in the warehouse that seem to rarely be easy problems to solve.  I need to work on scheduling breaks and lunch and sticking to the times.  I was lonely and a bit sad at the end of the day because no on offered or invited me to hang out.  I probably shouldn’t expect too much because people tend to hang out with their training/orientation fellows.  Since I went through orientation by myself I am at a disadvantage.  I hope it gets better soon.  Tonight I had dinner with CollegeFriend!  It was super fun and she even treated me to dinner!  We were going to hang out after dinner, but I got REALLY tired.  It came from being awake at 5am and then working 10 1/2 hours in a warehouse all day.  We will hang out again soon (next week) which will be awesome!

I’ll probably go to CollegeTown tomorrow, driven by the needs to get an allergy shot, some more apartment things, and to see Boyfriend.  I’d wanted to wait so he could have some Brother time but I miss people.  Here there’s no one to help meet my “cuddle quota.”  I have a large personal space bubble and don’t like touching strangers but I really miss hugs! I even miss handshakes or slaps on the back, or even high fives.  It’s strange how you can be surrounded by people and still be so isolated.  It makes me want to branch out a little and try to high five people or something but not really because I seriously HATE germs.  Germs totally freak me out! My OldDog got a hair cut and I can’t wait to see it! He has a bandana and everything so I bet he just looks so smug!

Now, to bed and sweet dreams!

"May your life be interesting" is the greatest faerie curse.

Been There, Blogged That

Flirtations with Travel, Experiments with Words