Just met Neil Gaiman at a book signing!  When asked about his next medium he announced it to be interpretive dance! LoL He later said he was kidding but it was still amazing to hear him speak and read from his #1 Best Selling book The Ocean at the End of the Lane.

When we arrived to the school where the event was held we ran right into a giant crowd… we were not sure if it was the line or a mob… even in the midst of the line-mob it was unclear.  The line was like a study in human chaos theory.  I announced that the line was likely a trick played on the fans by Neil himself where the line circled in and around itself and through trees and over sidewalks with no clear beginning or ending and in fact was one continuous circular loop that represented the real world and the people who noticed and got out of line and went inside were the ones who had discovered the NeverWhere.

This announcement earned me dark looks, laughs, and three new friends and we exchanged contact information as a result of our nerdy fandom! 🙂

When I finally met Neil I didn’t even Fangirl-Fail!  I didn’t cry or squeak or say anything stupid.  I just beamed a smile at him and thanked him for his writing and for having the tour somewhere I could get to!  It was an event worth traveling to and I’m thrilled I got to meet him!  He even smiled at me!  I almost fell off the stairs right after we got our books signed because I was recounting the events of the previous minute wherein I had a book signed and was also smiled at by one of my favorite authors on his last ever book tour to Husband (who also happened to have been a part of that last minute…) luckily I recovered and made it down the stairs without mishap. 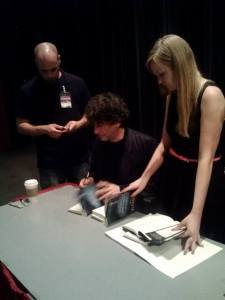 Book Signing for the #1 Best Seller

Now I am off to read!

"May your life be interesting" is the greatest faerie curse.

Been There, Blogged That

Flirtations with Travel, Experiments with Words